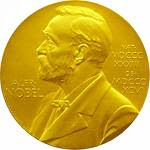 Just hours after the Swedish Academy of Sciences awarded the Nobel Prize in Chemistry for work that delves into the complex chemical compounds that form the thousands of proteins that make up living matter, Stockholm was rocked this morning.

A spokesman for Omnipublic, the holding company that owns the MDC Laboratory, promises an ongoing investigation.
Posted by george tannenbaum at 7:44 AM

I saw a follow-up report on this. Turns out the application was submitted via Twitter. The entire scientific community was so blown away by this landmark innovation they failed to even notice it was all bogus.