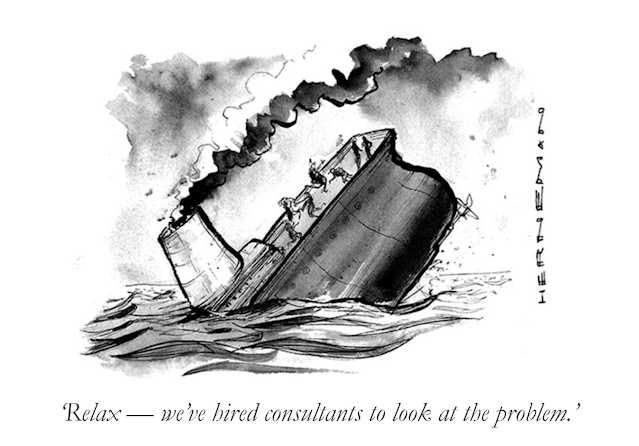 Many years ago before holding-company corruption sullied the advertising industry into something ugly, brutal and unrecognizable, there was a storied agency that I won't name here.

I won't name it because I'm Facebook friends with one of the eponymous founders who's also a Hall-of-Fame writer, and I don't want to get on his famously belligerent bad-side.

His was an agency that runs counter to the ways of just about every agency still in existence today. (Though with GeorgeCo., LLC, a Delaware Company, I've tried to adopt many of its tenets.)

First, they famously said, "We don't have rules. We have standards." I'm not going to comment on that other than to suggest you let it sink in for a while. Advertising, as Lord Bernbach told us, is persuasion. And persuasion is an art, not a science. And art doesn't, or should not have rules, except that rules are only things which we should break. I'll rhyme it for mnemonic's sake: rules are for fools.

A second tenet, and the point of this post, was this. Advertising is a product, not a service. Our product is brilliant thinking that helps a brand. That's what we make. Not dinner dates and golf outings with clients. Of course, we provide service. But the minute showing up on time, playing scope-poker and grin-fucking becomes more important than work is the minute you should leave the business.

The scion of this agency, a Hall-of-Fame copywriter and my Facebook friend was notorious for believing that it took two weeks to write a good piece of copy.

One day, legend has it, another storied copywriter took a piece of copy in to be reviewed. The scion grabbed the paper, crumbled it up and threw it angrily in the trash. "It couldn't possibly be any good," his boss said, "you wrote it in a day."

That night, the copywriter went into his boss' trash (these were pre-hard-drive days) rescued his copy and pressed it flat under two things people used to have in their offices: a dictionary and a thesaurus. Two weeks later, he re-presented the copy and it was approved with hardly a hiccough.

Some of it was my campaign--my campaign for "Now-ism."

I often say to a client, "if this were due in two-hours, here's what I would write." Usually, it's pretty good.

The Now-ist philosophy is something I've been following my whole life. I have prodigious powers of concentration, and I'm often half-way through writing something before most people have stopped complaining and have started in on panicking.

Like I said, this blog, for 14 years has been Now-ism practice. Fuckit. I have to post something tomorrow. So, I write.

Here are my Now-ist Cliff Notes.

You can read them Later.

NOW-ISM
One thing I've learned through the centuries is that many times the first company on the air or first in the market will carry the day. Today most messages spend more time being revised than they spend being run.
That's why I abide by Now-ism.
Now-ism isn’t about meetings or discussions or deliberation.
Now-ism isn’t about complicated charts and research and re-dos.
Now-ism is about going back to your desk and doing shit.
Now-ism is about taking your best shot based on the brain you were given, the skills you’ve developed and the gut that you trust.
It’s not about doing things when you’re scoped.
Or after the eleven-teen other meetings you have to attend.
Or when there’s a proper brief.
Or after your time-sheets are done.
Or when you're 'inspired.'
It’s about cutting the crap, cutting the cord, cutting to the chase, cutting out the middleman and maybe cutting out early.
So you can get things done.
Now.
-
That's it from me for now.
I have things to get done.
Now.