A guy called me up the other day, a young guy. Of course, for me, anyone under 50 is a young guy.

He said he'd been reading my blog for a while, from way down in Brazil, in a city of 400,000, a few hours south of Sao Paolo. I've been to Sao Paolo twice. Going there was like seeing the first two minutes of Citizen Kane and then the movie shuts off and you're never able to see the rest.

Brazil is an enormous country, with a huge population. Sao Paolo alone is twice the size of New York. And while I hired a tour guide and spent an entire day traversing the great city, I realized I hadn't come close to really being in Brazil.

As Thomas Wolfe's unnamed character says in his great short story, "Only the Dead Know Brooklyn, "Dere's no guy livin' dat knows Brooklyn t'roo an' t'roo, because it'd take a guy a lifetime just to find his way aroun' duh goddam town." You could sure enough say the same thing about Brazil, maybe a thousand times over.

Before I got off the phone with my new friend, I asked him if he could recommend any good books about the history of Brazil. Like most Americans, I know next to nothing about our geographical next-door neighbors, save Brazil didn't abolish slavery until 1888--which seems in its own way remarkably close to my very own lifetime. 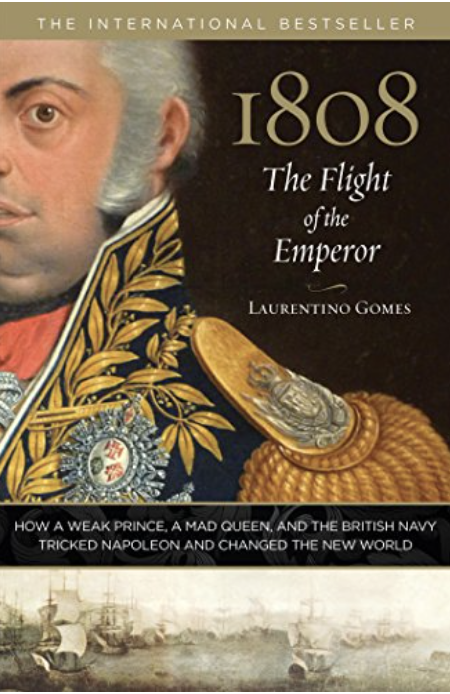 He recommended this book, "1808: The Flight of the Emperor." If all goes according to plan, I should finish it tonight or tomorrow night.

I remember when I was in college and taking history courses, I had a professor say with disgust, "The English landed in Virginia in 1607, perhaps the most fertile and abundant land on earth, with fish in the James River and oysters and flocks of birds and game in the forests. Yet they would have starved to death if the "Indians" didn't bail them out."

About 20 million Africans were transported to the Americas during the duration of the slave trade. Half of them died on their way to the sea coast. And of the half that remained, another 25 percent died on the Middle Passage to the Americas.

You start with 20 million. Halve it to 10 million. Then subtract 25 percent. About eight-million people were brought over here as slaves. At a time when there were probably five-million Europeans combined in North and South America.

Consequently, you didn't have to be rich to own a slave. A slave cost then the equivalent of what a Hyundai Elantra would cost today. So everyone had at least one. Brazilian society could barely have functioned without them. They mined the mines, picked the cotton, sugared the cane, plucked the coffee beans and more.

Because Portuguese colonialization was essentially extractive (think Walmart) they weren't putting down roots. They were going to take the gold, diamonds, coffee and hard-woods and leave. Why build infrastructure? Why build anything?

So, cities had no streets, or sewers, or access to fresh water. Slaves carried human waste and dumped it into the sea. Slaves were needed for that as well.

This is a roundabout way of saying that in such societies, to be elite, or even just to be white, meant you didn't work. You had people for that.

When I went to work for Ogilvy the second time, I was impressed with CCO, Steve Simpson. I was being hired for a relatively lofty position, but Steve made it clear to me that, "everybody works." Meaning, no matter if you had an E or a C in front of your title, you had ads to do. Not just ads to supervise.

If I were a more nimble kind of 200-pounder, I would have clicked my heels on hearing that.

Thorsten Veblen some centuries ago wrote a famous book called "The Theory of the Leisure Class." I've rewritten it for our era, calling it the "The Leisure of the Theory Class." In other words, most agencies have one or two tiers of people who do nothing but critique and/or theorize. They'll tell you how things ought to be--and take two hours to tell you--but they won't take 20 minutes to type it themselves.

I am no longer in the agency business, touch wood. But if an agency contacted me--if they got past my age and my strong opinions and my antiquated work habits and my grizzled gristle--I'd expect everyone around me, especially me, to do the work of work. Not just high-ticket Superb Owl spots either.

Maybe it's this simple: if you can't find some simple pleasure in creating a banner ad, writing a direct mail letter, or doing something no one else bellies up to the bar to do, well, regardless of your age, it could be your time to move on.