A Country-Western song by Robert Altman. 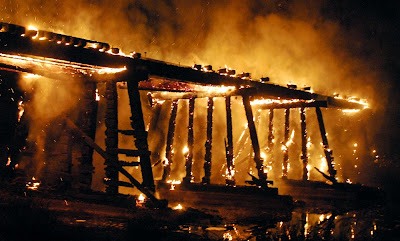 There's a book review by Janet Maslin in today's New York Times about the career of the great film director Robert Altman.

My father, when I was a kid, used to force me to read The New York Times' book reviews. He said he knew no better way of teaching yourself to write. I've taught my kids the same thing because I think my father was right.

Janet Maslin's review starts with these sentences:"Robert Altman once engaged in a jokey contest to create fake country-music song titles. He made up one that perfectly encapsulated his career: “I’m Swimming Through the Ashes of All the Bridges I’ve Burned.”"
Posted by george tannenbaum at 2:07 PM

well, at least his swimming kept a career afloat.

I was once told "you didn't just burn those bridges, you nuked them."