A Friday treat from Kristen Cavallo, CEO of the Martin Agency.

The strange wonder of the social media age--even when you're inherently and incessantly anti-social as I am--is that if you keep your nose to the grindstone, you can wind up meeting just about everyone in our ever-shrinking industry.

Not too long ago I made the Linked In acquaintance of Ms. Kristen Cavallo, who is the CEO of one of the world's most-creative, most-business-building agencies. The Martin Agency.

I'll admit, I haven't spent as much time as I should on the Martin Agency's site. Like most creatives, I already struggle with feelings of inadequacy and looking at Martin's site only rubs my nose in such matters.

In any event, after months of pursuing Ms. Cavallo, like Cyrano sought after Roxane, I finally got Kristen to write a blog post for this humble space. My question to Kristen was simple. What ads inspired you, motivated you, got you interested in the ad business?

Here are Kristen's answers. And ten of her favorite commercials.

Thank you, Kristen. Thanks for the inspiration, the wisdom, the ideas and the laughs. Ours is a small community. It's especially nice when we metaphorically hug each other. These days, we can all use a little human kindness.

It was very hard to answer your questions because I love advertising. At various times in my career, certain commercials have motivated me for different reasons: Burberry runway shows when working on the Microsoft stores, or Got Milk when I was just starting my career in planning.

These are the stand-outs, in no particular order:

1. World’s Toughest Job for American Greetings – It unmasked heartfelt respect for moms by hijacking a manufactured holiday with a faux recruitment ad for a make-believe company. It was one of the most-watched ads of that year, and organically returns every May. For a client who’d historically done lower-funnel performance marketing, this four-minute spot (that never showed the product) was the equivalent of jumping out of a plane on a first date.

2. Pink Moon for VW - Imagine a brief of “longing” as the highest order benefit? Approved by a client that trusted the product would shine brightly even as the supporting actor in the story. In a category drowning in self-congratulatory manifestos and self-absorbed RTBs, this won the hearts of the more important audience: Drivers.

3. Justino for the Spanish Lottery – Instead of game show junkies or gullible optimists, lotto ticket holders were portrayed as humble Samaritans. We were all rooting for Justino.

4. Susan Glenn for Axe - Yes, a jealousy-inducing lesson in copywriting. But also art directed and produced with equal levels of punch.

And I wish this ad inspired envy in as many clients as it did agencies.

6. Coleman Sweeney for Donate Life – Trying to persuade millennial men to donate their organs wasn’t happening through Sarah McLaughlinesque, altruistic ads that pulled at the heart strings. Instead, it took humor with a dose of shame to get them to act. The first ten times I laughed out loud.

7. Snickers - A strategy so compelling it persuaded a client to take their name off their packaging and replace it with negative terms. It’s one of the best case studies in showing the power of a clear enemy, made more so because the resulting work is fun - not angry. 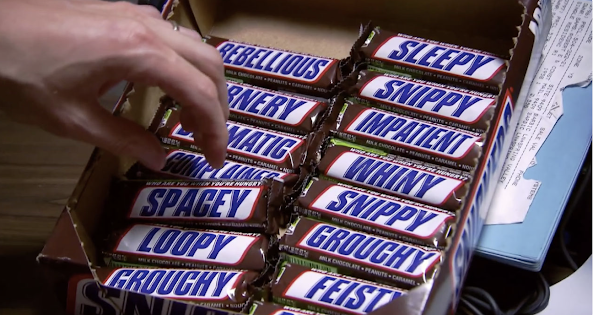 8. Dove FBI Sketches –Advertising usually defaults to product or consumer as hero. Dove had the courage to show the consumer as vulnerable and accountable. This was a brave choice, one without examples to light the way as proof positive it would work. Women responded to the constructive criticism with gratitude.
Credit: Ogilvy

9 and 10. Geico Caveman Airport and Geico Raccoon Try It - A cerebral GEICO ad, x2. You’d be surprised how much humble intellect is behind this brand. With a YouTube channel boasting more subscribers than franchise shows and entire networks, they helped America fall in love with what was once un-loveable, cinching their place as ad entertainment royalty.

Once again, thank you Kristen.

You have good taste. Especially in blogs.

Posted by george tannenbaum at 5:04 AM