I'm not sure it's safe to assume we'll be alive after Tuesday's sham of a US election. I call it a sham because we're not sure who gets to vote, which votes count, who counts the vote, or even if vote totals matter.

But assuming some of us remain alive--not killed by a hoax virus, runaway opioid addiction, one of the 400 million guns in the US, a lack of available healthcare or radical racist right supporters of a radical racist right reverse Robin Hood repugnant republican part metaphorically driving what used to be democracy off the road, it makes sense to think about how we'll survive the crescendo-ing demise of the advertising industry.

Now that there is no longer any such thing as either having a conscience or an investigative arm of what used to be journalism, it takes a little individual work to juxtapose headlines. It's the best way to really get an idea about the raping of the industry by the holding company minions and their associated vandals.

I put together this confluence on Friday but what so sickened about the avarice and rapine displayed that I waited through the weekend--until now--to post it. 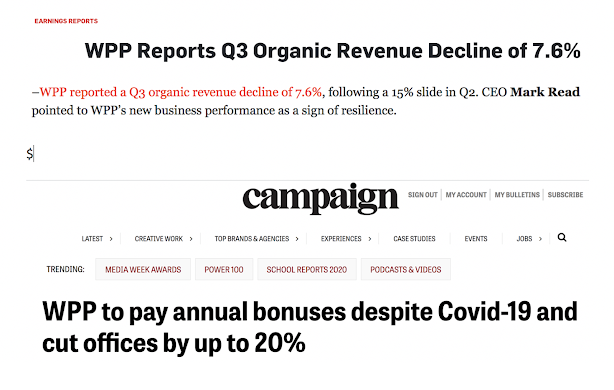 Let's lose more than one out of every 10 dollars, cut one out of five jobs and then bonus ourselves. My guess is that 90% of those bonuses will go to the million-dollar C-suiters, with 10% being distributed in thousand sou parcels to others so the C-suiters can extol the egalitarianism of those bonuses.

Even so, this is the profession we have chosen. To that end, and in the imitative spirit of so much so-called journalism, I thought I'd doff my pundit head-ware and present my list of Top 5 Skills Needed to Work in Advertising in 2025.

1. Groveling. "Please sir," you might practice, "strike me again." "Please make me work 70 hours and through another weekend. So you can take a black-car home and expense your wine-cellar, sir. I'm just lucky to have a job, sir."

2. Obsequiousness, ie the ability to thank people for your lack of job security and for not being paid for half the hours you work because after all, you work in a "creative" industry, and that last animated foot-fungus spot you shot went through only 17-rounds of client-mandated changes.

3. Inherited wealth. Since the only people who get raises are those who don't need them, all those remaining in the industry will have to have had a rich family just to live in high-cost cities.

4. No sense of smell. Also known as Anosmia--it's needed since you'll be working for people who believe their shit don't stink. (Trust me, it does.)

5. Eating bugs aka Entomophagy. Advertising, except for a few-dozen people at the top is not just a low-wage industry, with its notorious "razor-thin" margins, salaries are actually decreasing from year to year as are payrolls.

According to a UN study reported in the "National Geographic," there are over 1,900 edible--and economical--insect species that can fill you up without emptying out your wallet. According to the study, "Many insects are packed with protein, fiber, good fats, and vital minerals—as much or more than many other food sources."

Beetles, particularly the long-horned, june, rhinoceros and dung varieties (op cit Gregor Samsa) can be roasted over coals and eaten like popcorn.

Butterflies and moths. They're more than just pretty! They're full of protein and iron.

Bees and wasps. They're not just for honey anymore. Bees taste like peanuts or almonds and wasps have a pine-nutty flavor--pignoli anyone?

Lice. From your head to your dinner plate, they taste, I'm told like duck or fish.

Posted by george tannenbaum at 5:51 AM