Some have mediocrity thrust upon them. 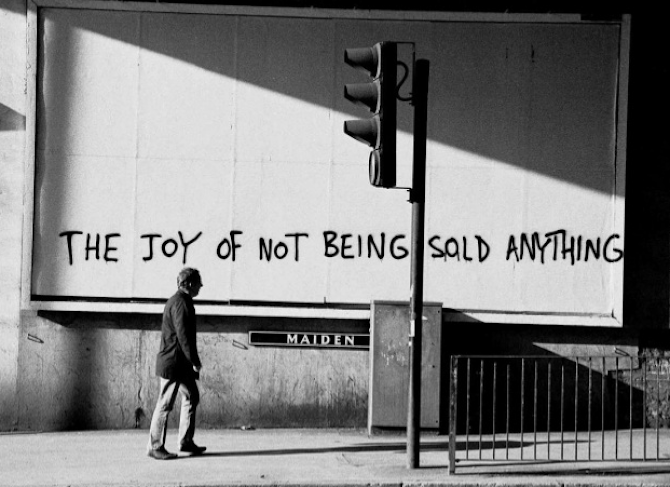 If I had to characterize the ad industry essentially since it died of self-inflicted wounds, I'd say something very simple.

For the last thirty years or forty, we have been selling too much and helping too little.

We have been inundating consumers with billions of dollars of messages on every conceivable medium saying "buy me, buy me, buy me," but we've been doing nothing that involves giving people bonafide reasons why or even reasons to believe.

We've been doing nothing, or very little, that rings true and honestly and we've been doing a lot of school-yard bullying--essentially the advertising equivalent of because we said so, that's why.

I think much of this anti-why, anti-respect, anti-honesty posture comes from an ethos that is essentially anti-people. For thirty years, as the control of American life has essentially been grabbed by fewer and fewer bigger companies, we have treated people as if they are, instead of people, MROs--marketing receiving objects. We are all just pockets to be picked--service, respect, kindness--they're like driving with the brake on.

Giving the monopolistic nature of the world today, we no longer in our marketing persuade. We employ a Goebbels/Trump strategy that might be called "the Big Lie." We lie over and again till your brain is either deadened or flaccid so you accept our lies.

Except everything gets worse.

Verizon, for instance, spends over $1 billion to tell you how reliable their network is. They'll spend $1 billion showing you maps that show how great their network coverage is. They'll probably spend another $10 billion promoting 5G. They'll tell you and tell you and tell you. Yet about half the calls you make probably drop, the more important the call, the greater the likelihood it'll fail.

Along the way, if an agency made a plea to the client for more candor, if someone presented an ad that had a scintilla of self-effacement and humility in it, they'd be removed from the account, if not the agency by day's end.

Advertising has become--and we've let it become--a giant Trump rally. Exaggerations, lies and bullshit are repeated at triple-digit decibel levels and the "showrunner" of such assumes the public is too fucking dumb to know when they're being lied at.

Can you imagine if the aforementioned Verizon--only a for instance, ran an ad or a commercial that said: "Last year, American's suffered through 1,254,775,398 dropped calls. Here's what we're doing about it."

It's too honest and too respectful. And too considerate. And too close to the golden rule--treating others how you'd like to be treated.

The purpose of advertising in a respectful community is not to use adjectives and honeyed words extolling the virtues of a petro-chemical laden cleaning pad that will linger in Staten Island landfills for 200 years.

The purpose of advertising is not to show smiley clerks who are always friendly and helpful and knowledgeable when in real like every clerk I've ever encountered in any CVS store is usually drinking a Big Gulp and walks the other way when I'm looking for something I can't find.

What makes it all worse is that everybody knows this kind of shit is a lie. They know when an oil company says they're spending $100 million on environmental clean-up that expenditure is on profits of $27 billion. They know that no flight-attendant in real life has ever smiled. And now when I go online and get immediately a pop-up window with a small picture of a super-model named Britney who is in real life is nothing more than a badly-function bot, they know I'm going to be pissed.

But advertising is always selling.

And always doing everything they can not to actually help people. Because we're a monopoly, dammit, and we'll do as we please.

I want an ad from a rental car company that doesn't show a smiling woman behind the counter and no line.

I want an ad that tells me business travel sucks and maybe they can make it suck a little less.

That would acknowledge reality.

That would mean treating a person with respect.

Posted by george tannenbaum at 6:29 AM