My boy George can write 50 ads in a hour.

I have in my fingertips the memory of ten thousand ads. I have virtually every One Show book ever published residing in my digits, every Art Directors' annual from 1962 on. Every Communication Arts Advertising Annual.

I have in my fingertips a truck-load of trust dumped onto me by Steve Hayden, who barely knew me but had an idea that I'd never let myself, him, the agency, and most of all my clients down.

I have Andy Berndt saying to me, exasperated, "You're writing ads faster than I can read them."

I have Kirk Souder turning thick leather reins over to me and saying, in a sense, you figure it out.

I have Hall of Famers Mike Tesch and Amil Gargano going to bat for my work--for something as small and inconsequential as a radio commercial, calling the client and saying 'you have to buy this.'

I have Marshall Karp and Harold Karp respecting me as more than a copywriter, as a writer.

I have the precision of Steve Simpson haunting me like a phantom. He put more pressure on me than almost anyone else. Because he trusted me and let me solve things my way. I was in it alone.

Same with the great Ed Butler, one of DDB's and Ally & Gargano's greatest writers who said to me after I wrote just one ad for him, "You don't have to show me your work anymore; I trust you."

I have all that and more.

It's all in my fingertips.

It's all there and ready for me to release.

There's no writer nowhere who doesn't face, at times, the specter of impotence and paralysis. When hot-tempered, vein-popping technocrats are mouth-breathing behind your Aeron and saying without words, "Where is it? We need it!"

There's pain and sweat and primal fear of those 2AM airless conference rooms when a dozen ads or two dozen have to be done for a 9:30 with the CMO, who more often than not doesn't know what she wants until you show it to her. Again. Again. Again. In four different media channels. To time.

There's a veritable United Nations of voices you have to accommodate in the 58 words of a spot or the 310 characters of copy for an ad. Ann wants this. Jill wants that. Amy wants this. And there's no brief. And no background. And no data.

There's only a blank spot on a layout filled with lorem ipsum that suddenly needs a beginning, a middle and an end, filled with facts, persuasion and because you give a modicum of shit and like a proper closure, a smile in the last line.

Just now my wife said to me as I start yet another 16-hour day, "You know you don't have to write your blog every day. You've written every day for 6,000 days. You can take a week off."

This is what the Read-istas and other petty bureaucrats at the money and sphincter squeezing tops of the holding companies and their agencies can't understand.

They're not ad people. They're accountants. They're not even humans. They're "managers." They won't can't never-will can't come close to getting it.

There are those of us who believe in what we do.

We live what we do.

We love what we do.

We become students of what we do. Upholders of the craft. Fighters for integrity. Keeper of the dimming flame.

We can write 50 ads in a hour. Because sometimes that's what it takes. And everybody else has been shitcanned or is too busy coming up with "experiences" that will never escape from page 94 of a 91-page deck.

This is from Walter Isaacson's magisterial biography of a guy you might have heard of, Leonardo. (Not the turtle.) 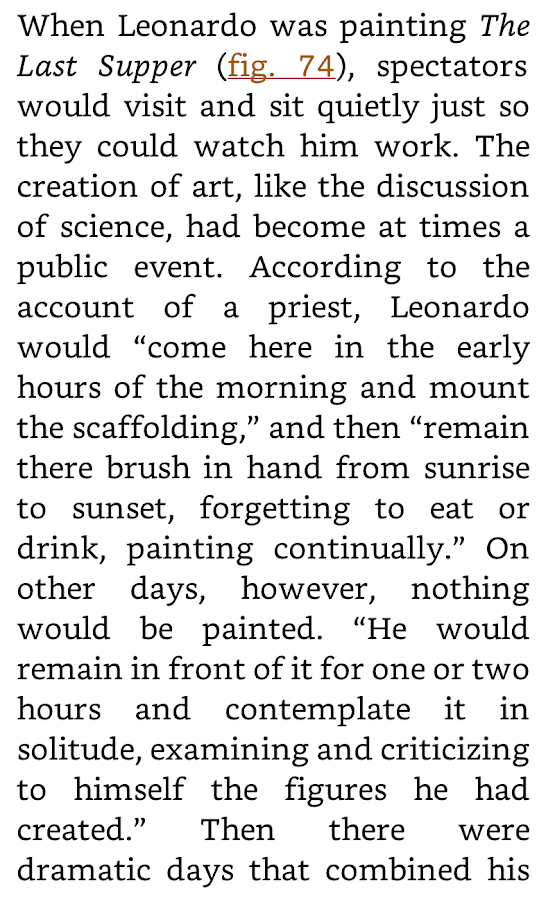 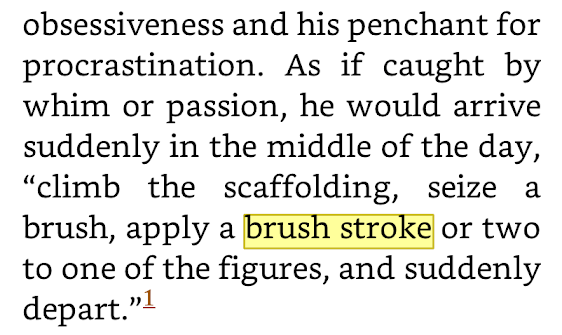 I don't I won't I can't and I shan't ever understand the dastardly dumbness of the dim-bulbs who destroy storied brands by undoing and undercutting and ununderstanding what made them great in the first place.
It would be like removing the pin-stripes from the Yankees' uniforms. Or the twist of lemon from a really good martini. Or removing the moral from Aesop.
Such things may be costly and time-consuming. They may not deliver "robust ROI" or some cockeyed measurement that gets the spreadsheet-tyrants nodding and chortling.
But I think, I dunno why, about William Carlos Williams. Who figured out how much depends on things that most people can't even see or ever see.

The Red Wheelbarrow
so much depends
upon
a red wheel
barrow
glazed with rain
water
beside the white
chickens
--
So much depends upon things that don't matter at all.
Once you know that--when you finally know that, not until you
know that, are you a professional. Otherwise, you're a dilettante
or a technocrat, or a cost-cutter. Or worse of all, a faceless punch-card from corporate who squeezes and squeezes and cuts and cuts because the fat cats in the carpeted private offices need their vig, that's what they do for a living. They do it to you before you can do it to them.
Once you know that, you know everything.