When you spend a significant amount of time with little kids and when you watch TV or see movies with them, you can quickly divide the world, Manichean style, into two schools of thought.

One school seems to say, "they're just kids. Their brains aren't well developed. To be interesting to them, we have to talk down to them."

The other school takes a different approach. It says, "these kids might not have a two-dollar vocabulary, but they're more sophisticated than you'd suppose and they can handle some pretty complex ideas as long as they're presented in an age-appropriate way."

A couple hundred thousand years ago, our hominid ancestors figured this out pretty well. There wasn't, half-a-million years back, a notion of childhood--a discrete time for kids to toddle, grow and learn. Kids, as soon as they could walk, were given jobs to do. Chewing animal bones to remove sinew, cutting stone blades or caring for other young people.

They had less to do, but they were never made to feel useless. In fact, if kids hadn't learned to pull their weight they'd probably have perished. The Neanderthal world was a pay as you go place.

I've noticed in advertising people making the work have a hard-time not talking to people like they're imbeciles. They either don't understand their audience or they think their audience is dumb.

If you're a New Yorker think how many ads you've seen that mimic language that no New Yorker ever uses. Sometimes it seems that 1/3 of all ads contain some allusion to the city never sleeping and another 1/3 seem to believe that the only thing a New Yorker ever says is fuhgeddaboutit.

To me, talking down to kids or trading in cliches is just a form of bias. The talker doesn't take the time to really think. He or she just assumes. Pre-judges.

So much of what we see and hear is unreal, un-human and un-natural. As an industry or a discipline, we seem not only to use stock photography but to think in stock and cookie-cutter ways.

Just an hour or so ago I got a letter from a State Farm insurance agent who has an office near where my wife and I are holed up while we try to ride out the Covid storm.

I'm sure the agent is a very nice woman and she means well.

But someone convinced someone at State Farm that in order to sound modern and contemporary, they had to write their business letters for insurance products with a certain 21st century air of insouciance. Or stupidity. 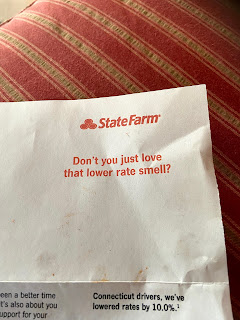 The header on the letter said, "Don't you just love that lower rate smell?"

My wife asked me why I was shaking my head.

I recited the line.

"You're kidding," she said.

"I suppose someone thought that was funny," I said.

I'll admit, the few times a decade I think about insurance, I'm not usually in a jokey mood. I understand why GEICO chose to be funny--they were unknown and humor got them known. I even understand--though I hate--the work done for Progressive. But now virtually everyone in the category is trying to do the same spot.

I suspect the LiMu Emu is working well because Liberty Mutual was all but unknown a few years back. And whoever did Mayhem had a pretty good run for a while. But this shit from State Farm.

It's all trying so hard.

It's all so devoid of meaning, devoid of persuasion or humor or, heaven forfend, reasons why.

I guess these brands only want to be noticed.

You have to be liked.