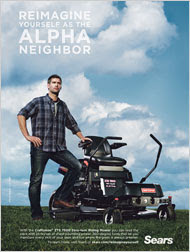 Today's New York Times advertising column reports about a new campaign for Sears. Also on the back-page of at least two sections of the four section paper, two full-page ads heralding the acquisition of AG Edwards by Wachovia Securities. Both campaigns are way over my head--I don't get what they're saying or what it means to me. And last I checked my IQ was in the high, Republican double-digits.

Let's start with Wachovia's. Their ads exalt the word "with," because, I suppose AG Edwards is now with Wachovia. One ad features a photo of four young boys laying in the surf on the beach. The headline reads, "WITH IS A POWERFUL THING." The first line of copy proclaims (fasten your seatbelt Vladmir Nabokov) "With. Four letters allowing you to declare a choice that you've made." Wow, if that isn't profound! Like, when I declare "I won't have relations with a woman who has oozing leprosy." That's proclaiming a choice I've made. The first line of a second ad that has a stirring headline that simply says "With" is this: "A simple, unassuming word that's nonetheless powerful. It connects. Creates a bond. Defines relationships." Jeepers. What this has to do with two financial services companies is thoroughly beyond me. I mean really. I just don't get it.

Now onto Sears. Sears' ads beckon the reader to "Reimagine You." The CMO of Sears explains it this way: "“We have to do a better job of collecting our products and turning them into experiences." OK. So, the ad shown here with a guy and a riding mower, "Reimagine yourself as the alpha neighbor" is now an experience? Does anyone anywhere think the average American knows what the adjective "alpha" means?

This is "brand" advertising. And the reason agencies and CMOs so quickly get the axe. It's obtuse, masturbatory and vapid. Maybe it should run for president instead.
Posted by george tannenbaum at 7:19 AM

I'd love to have a few Alpha neighbors provided they have the tools i don;t have, the time i don't have, and the energy i don't have; to pop over, impromptu, to do my lawn once a week, the spring cleaning, gutter cleaning, snow shoveling, weed pulling, pruning and a host of small repairs. That would be a true alpha neighbor. Personally i don't want to imagine myself as one.