Water is wet. Heat is hot. And other big news. 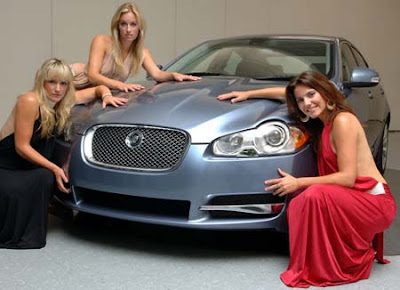 Jaguar the nearly defunct automaker is at it again. Jaguars have had at least a forty-year reputation of breaking down, burning up, or simply not running. As they used to say "Ask the man who owns one." (In fact, in the early days of Jaguar in the US, if you drove through the mountains, you had to open up the carburetor on the way up the mountains, and close it up again on the way down. Jaguars were built only for the UK where the highest altitude is 3000 feet. But, as usual, I digress.) What's more, Jaguar competes in the classiest and most competitive niche in the automotive marketplace--the sphere dominated by Lexus, BMW, Mercedes-Benz and Infiniti. All manufacturers that make attractive machines that actually work and that actually maintain their resale value.

OK and whew. That's a roundabout way of saying Jaguar's reputation for mechanical integrity and reliability sucks. What no one has ever ever questioned is that Jaguars are beautiful. So now, as 7000 Jaguars languish on lots, as sales are virtually non-existent, Jaguar launches a new car via a new ad blitz. Their headline? "This is the new Jaguar." Wow. Seminal.

There is or there should be when possible, a news element to advertising. The best advertising is NEWS. News isn't that Jaguar is gorgeous.

Maybe when Jaguar finally closes up shop because they can't sell any cars, that won't be news either.
Posted by george tannenbaum at 10:11 AM

Jaguar has lost it's magic. Albeit not its beauty.
The ads, over the last decade or more, while trying to play to some sort of understated refined aspiration, have been nothing but "me too".
Jaguar was probably the only fashion brand in the auto industry, but they never understood that.
With fashion, I mean that their appeal when at its height was more associated with a certain class and its lifestyle. Besides the fact that Jaguars where used by cops and as escape cars, in Britain, in the sixties. that was their sexiest period, and sort of underscored that cool. Long after their racing times decades earlier.
Done right they would have been the Ralph Lauren Pink Label of cars, or something like that.
Range Rover stole that position as a brand. Old country chic.

The supers at the end of the spot should read:
This is the new Jaguar COMMERCIAL.