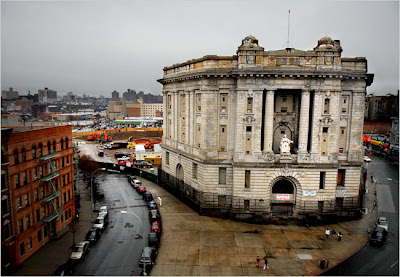 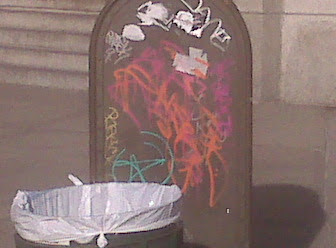 As an amateur historian (who is, with all due modesty, better read than most professional historians) I've always decried graffiti as evidence that the Vandals are taking over, as they did in ancient Rome. Now, I wonder (not that I approved of writing on walls) if the explosion of graffiti that seemed to start in the late 70s was really the harbinger of today's Wiki-World. Edifices have collapsed--they have little meaning--see the top photo--a courthouse on 161st Street in the Bronx. Today people want to be heard. They don't sit in straight rows and wait to be spoken to. No, they believe, rightly or wrongly, that they deserve a voice.

Say goodnight, Gracie.
Posted by george tannenbaum at 8:32 AM