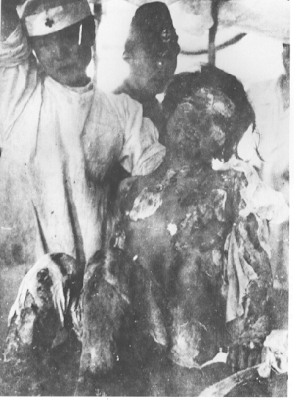 I am not here to judge the wisdom of using the bomb, whether more American lives were spared because the war with Japan was brought to a speedier conclusion. I am here to say this was an event in world history that should give us a moment of pause. Something about which we should think. Take a moment and consider nuclear arsenals today.

Instead we talk about banalities. Paula Abdul. The New York Times has a front page story about golf courses using new methods to save water and another about Laura Luke's homegrown cosmetics empire.

Neil Postman 24-years ago wrote a book called "Amusing Ourselves To Death." Banality doesn't kill as quickly as fission. My guess is, though, that it kills more completely.
Posted by george tannenbaum at 7:14 AM

Your last two posts are a good example of the complete randomness and variety that you serve here with your writing styles.

I was told that Shakespeare appealed to the masses because he wrote for the aristocrats in the paying seats, and the drunken, crowd in front.

Good job keeping me interested, fits well with my ADD. I probably would sit somewhere between the two.

All lives are equally important. All justifications are evidently not.