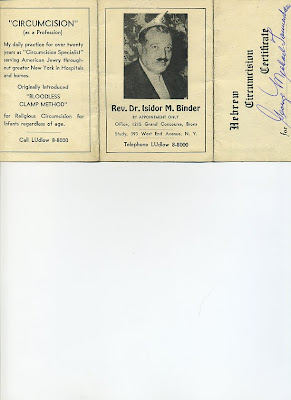 I had to go to our safety deposit box because even though I have been employed by five different Interpublic agencies over the years, an Interpublic agency needed to see my Social Security card so as to prove I am a US citizen.

Well it turns our I was snipped nearly 52 years ago by Dr. Isidor M. Binder who claimed in his advertising material (which the certificate was attached to) to have invented the "bloodless clamp method." The good doctor must have been a pretty big schmear because he had two offices, one on 393 West End Avenue in Manhattan and one at 1215 Grand Concourse at 167th Street in the Bronx. However, despite having two offices, Dr. Binder had just one phone number LUdlow 8-8000 in Manhattan, which I decided to call, on the dim hope of speaking to him.

Well, his number is now an office selling residential co-ops in what used to be the Plaza Hotel. Naturally, I've googled Binder but can find no info on him.

PS. He did quite a good job.
Posted by george tannenbaum at 4:35 PM

Thanks for the tip-off, Geo.

Cut it out with the humor. Serious stuff here.

you don't have to be so snippy.

Dang--we were talking about circumcision this morning and still haven't come to a decision. Can you remember if it hurt, Geo?

It didn't hurt. And it's provided years of jokes.

In Ontario it isn't covered by our health care plan so you have to pay the pediatrician $150. Wart removal is $50 which made me think.

Please don't tell my son I considered haggling with the Doc.