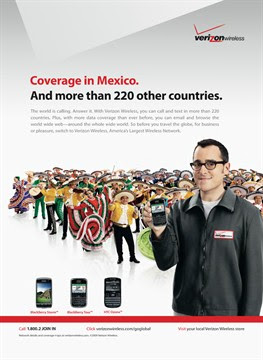 My post from last Friday was about a Microsoft banner ad which was revised for Polish media in which a black man was removed and an imbecilic white model was stripped in. Just now I saw something that topped that blight--or, rather, bottomed it, in my digital issue of The New Yorker magazine.

I'm talking about an ad for international coverage from Verizon. The headline, such as it is, reads "Coverage in Mexico. And more than 220 other countries." Of course the awful test guy is featured, but in the background there are scores of Mexicans. And did you know that Mexicans aren't like you and me? Nope. According to this Verizon swill, representative Mexicans all play in Mariachi bands. Yep, there they are, dressed like the wait-staff in a third-rate resort in Playa del Cockroach. Wearing sombreros, and little monkey jackets, holding or playing instruments with the women furling their long, colorful skirts like flags. This is some cartoon characterization of Mexico. At least the Frito Bandito and Speedy Gonzales were meant to be funny. This, I presume, is meant to represent Mexico. 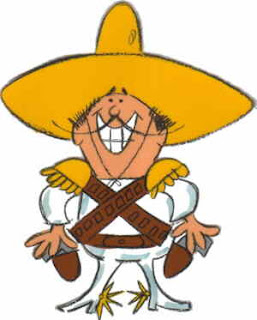 When Verizon runs ads overseas about service in the US, how do they depict us? Are there Hasidic Jews selling diamonds, gun-toting high school kids, watermelon eating black people playing basketball. Are there overweight, pants-suit wearing Bible thumpers and abortion-doctor-killing religious zealots? Are there defense contractors with their sleeves rolled-up, up to their elbows in innocent blood. Radical right wing haters spewing lies?

Verizon's advertising is always offensive because it is demeaning and stupid. This ad is worse than usual. It's demeaning, stupid and racist.
Posted by george tannenbaum at 9:24 AM

I agree. Signed, an apolgetic Canadian, sorry! wearing a toque, and carrying a hockey stick while humming "When its springtime in the Rockies" as I ski down the slope to my handsome waiting Mountie all decked out in red.

I am shocked by this ad. But I expect nothing more than aggressive awfulness from Verizon.

the largest telco in Australia was recently run by an American by the name of Sol Trujillo. he and his 2 colleagues were forever referred to as the Three Amigos and represented in cartoons with the full Mexican regalia. but my favourite was when a journo asked Sol when his family migrated from Mexico to the US, his reply "300 years ago"!

I guess I expect corporate racism to stain offices and boardroom--but you'd think they'd limit what they let out to the public.

Hi, me again, apologetic Canadian...And I have to say that I'm not convinced that this ad (and many like it) qualifies as "Racism" with a capital R, or --if it indicates corporate laziness, stereotyping, and good old fashioned ignorance.Not that that vindicates the "creative" (and I use the term loosely) but it does suggest that the advertising world needs to grow a conscience...will it? er, how much$

Susan, I don't disagree with you. But at some point laziness and stupidity can no longer be excused--I mean this is 2009.