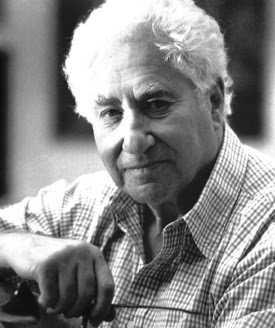 When I was a graduate student in English Literature, I did a Master's thesis on the Watts Writers' Workshop, an organization that was dedicated to encouraging young ghetto dwellers to write. This was 1979, just 14 years after the bloody Watts riots.

I read about this guy, Budd Schulberg who was behind organizing this group. I was just 21 and had no idea who he was, so I headed down to Grand Central Terminal where they used to have phone books from all over the country and I searched until I found his number. (This was life before the internet.) I called Mr. Schulberg. He answered and he agreed to meet with me and answer questions I had for him about the Watts Writers Workshop. (This was life before the internet as well.)

We met at a small theatre, early, long before the show and talked beforehand and went out for dinner afterwards. He was also kind enough to introduce me to writers from the workshop with whom I could speak.

I bring this up not just to name drop. But because Schulberg was a writer who believed in the power of writing. Here are the last two paragraphs of The New York Times Obituary of Schulberg:

“I’d like to be remembered as someone who used their ability as a novelist or as a dramatist to say the things he felt needed to be said about the society” while being “as entertaining as possible,” he said in the 2006 interview.

“Because if you don’t entertain," he said, “nobody’s listening.”

That's good writing advice no matter what you write.
Posted by george tannenbaum at 9:55 AM