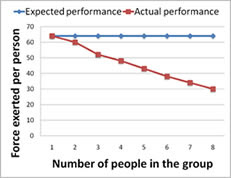 Over the past few years so many agencies and clients have decided that team work and "brainstorming" is the answer to all our woes. I have always been excoriated because I hate working in groups. I like to work alone. I like to work while I'm walking the dog, taking a shower, doing the dishes, sleeping. I tend to take a problem and roll it around in my head until I come up with something I like.

Here's what I liked and I am quoting from the review: "Teamwork, the authors say, suffocates creativity and has its own limitations. They describe a classic experiment done nearly a century ago by French agricultural engineer Maximilien Ringelmann. He measured people pulling on a rope connected to a strain gauge, first as individuals and then as members of tug-of-war teams. The result: A person pulls harder alone than as part of a group. Ringelmann dubbed the phenomenon "social loafing." Today it is known simply as the Ringelmann Effect, and what it means in the real world, say Messrs. Littman and Hershon, is that 'the more people you throw at a problem, the less each contributes.'"

Perhaps I don't need to say it, but I read the review and within seconds ordered the book. All by myself.
Posted by george tannenbaum at 5:07 PM

I loathe brainstorming. Simply dread it. We once received a timetable breakdown of a brainstorming session that gave us 10 minutes to work in groups, 5 minutes to come up with names, 3 minutes to revise... I got out of that one in a big hurry.

Glad I heard the negative from 2 pros. Im negotiating exiting my career and starting with a small creative agency. I have always thought group sessions were effective, so the huggy feely types at corporate always said. This outline makes sense to the contrary. Eye opening concept for me.

I'm gonna have to think on this one, how small groups of creatives can do it better. Any ideas much appreciated. (we could get together and brainstorm in a small room?)ha

You often see rooms full of people and a giant idea board. "There is no bad idea" they say.

There are LOTS of bad ideas. TONS. You've got to work through them to come up with the gems. Problem with brainstorming is you end up with a giant idea-board full of unusable rubbish.

Speaking of bad ideas
Brainstorming is a bad idea, especially if you have rotting brains.
And unfortunately there are way more bad ideas out there than good ideas.

Sorry, if I am being so negative about all of this, but I just came from 7 hours of a group meeting and then a team dinner- talk about a really bad idea.